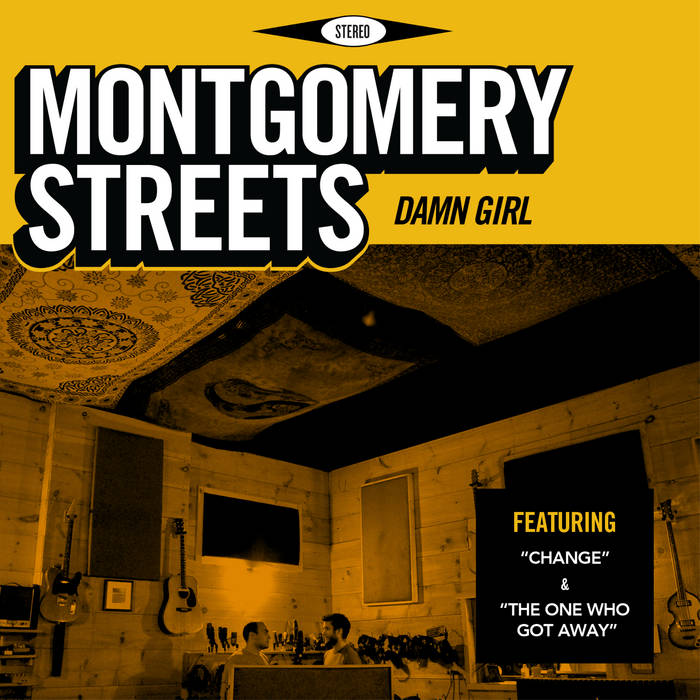 After their crititically acclaimed band "The Vinyl Addicts" disbanded in 2008, Brian Murray and Anthony DeFeo began writing some new songs in an apartment on Montgomery street in Brooklyn's Crown Heights. The songs were catchy, unapologetically pop and riddled with harmonies and introspective lyrics. Over time, the new band "Montgomery Streets" became known for their energetic and ever changing live shows. In 2013 they released their first EP "Damn Girl". Produced by Chris Cubeta at GaluminumFoil Studios in Williamsburg, the album marks a huge step forward for the band. Featuring Spencer Cohen on drums and Chris Cubeta on guitar/keys, songs like "Change" boast a fuller sound and driving beat while fan favorite "The One Who Got Away" sticks to the groups acoustic roots.

Recorded and Mixed at: Galuminum Foil Studios by Chris Cubeta
Produced by: Chris Cubeta and Montgomery Streets
Mastered at: Masterdisk by Alex DeTurk

Track Name: Change
i'm here now just to move
our lives are passing you by
the time i’m 25
in the pictures i’m that older guy

I'm here now just for show
at least i go with your new clothes
should i stay? should i tell you
that it's over or do you already know?
i tried with all my heart
but we both knew from the very start
what this was don't be mad because
you're still who you were and i'm who i was

i tried with all my luck
to be cool and to keep up
with you love but the truth is
you're so restless that i'm tired of pleasing you
Track Name: Damn Girl
my mistake was letting on
that i would break if you were gone
well you played me hey baby
you feel like a stranger
but the moment i let my guard down
well you took your gloves off to your sisters

i'd feel better if you don't
i'd say that i'd call ya
but we both know that i won't
and i'll always love ya
but it's better if i don't
Track Name: Mary
it's been awhile since i've been alone
whatever the day brings i know
i'm coming home to you
and all of my friends they
see me for the slave i am
i’ll always be chasing you baby
i'll do it to the bitter end

it’s been awhile since i’ve been alone
i like having you there safe
tucked in my back pocket
just in case i lose control
Track Name: Younger Then
you were hot for me
then cold again that’s your routine
i can’t complain or disagree
if i’m not around to make a scene

i know you changed and baby that’s ok
i know it seems strange but baby it’s a good mistake
if i had known we’d crash and burn before i asked you in
i’d still say baby hell let’s fuck it up all over again
Track Name: The One Who Got Away
i said some things i wish i could take back
and not because they weren't true
but more for lack of tact

what's that called, when you're busy making plans
my head it tries to rationalize my heart still makes demands

what's that word, i'm told it's all you need
with him you seem much happier with her i'm incomplete

Bandcamp Daily  your guide to the world of Bandcamp